In commercial kitchens, the design of the ventilation system is very difficult due to the numerous technological processes and the restrictions of the building layout. On the other hand, due to the lag of the kitchen process design, it is difficult to effectively coordinate with the ventilation design, resulting in poor kitchen ventilation, the indoor environment is very harsh, and the kitchen temperature in summer is often as high as 40℃. The hot oil fume during the cooking process fills the entire kitchen space, which not only endangers the health of the chef and reduces work efficiency, but also easily contaminates the dishes with sweat, which seriously affects the quality and image of the hotel. To this end, this article combines the actual engineering, a more detailed analysis of the kitchen ventilation system design and equipment selection.

The full kitchen exhaust system refers to the ventilation of the entire kitchen space. On the one hand, comprehensive ventilation can be used as a necessary supplement to the local exhaust system when the kitchen is running, and discharge the oil fume and hot and humid steam that overflow from the local exhaust hood to the outside. On the other hand, when the kitchen is stopped, the room can be ventilated to remove odors.

The kitchen air supply system is used to provide the air required for combustion and supplement the air taken away by the exhaust air. The air supply and exhaust volume should be basically balanced, and the kitchen should be in a negative pressure state to prevent the fume and odor from affecting other areas. The negative pressure cannot be too large, otherwise, the furnace will blowback. The data shows that the negative pressure in the kitchen should generally not be greater than 5Pa, and the supplemental air volume is 80% to 90% of the total exhaust air volume.

Generally, some kitchen air supply after cooling can be used as post air supply, and other supplementary air will not be processed. This can not only ensure the basic comfort requirements of the personnel working area but also avoid the huge energy consumption caused by cooling all the supplementary air. The post air supply is directly sent to the position of the chef. The new air outlet should not be too close to the chef. The height of the air outlet from the top of the chef's head is generally 500 mm ~ 1000 mm as shown in Figure 1. The design chooses a diffuser guide vane air outlet with d=200mm, the diffusion angle of the air outlet θ=25°, and the air outlet is 2200mm ~ 2700mm from the kitchen floor. 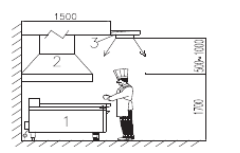 In the formula, L-the amount of smoke exhaust (m3/h); P-the perimeter length of the cover (not counting the side against the wall) (m); H-the distance between the cover and the stove surface ( m).

In the formula, L—the amount of exhaust fumes (m3/h); A—the area of the hood (m2 ); V-the suction wind speed of the hood section (m/s), generally not less than 0.5m/s, the dishwasher exhaust hood can be 0.2m/s. 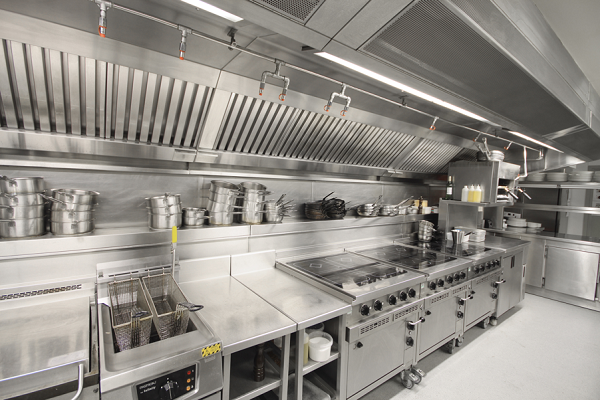 The influence of heat pressure on fan pressure and air volume

Thermal compression refers to the chimney suction effect that can not be ignored due to the different gas density of the smoke pipes or building air shafts of higher buildings. The suction force is related to the height and the difference in gas density. Its size is:

In the formula, g-acceleration of gravity, m/s; h-vertical distance between the inlet of the exhaust hood and the outlet of the air duct, m; p1-the air density at outdoor calculated temperature, kg/m3; p2-Density of hot air in the pipe, kg/ m3.

Next, calculate the hot air buoyancy of the kitchen. The air temperature rise is:

Therefore, the general vertical height of the floating pressure △H=gh (p1-p2)≈2.2Pa/m (the density difference is the average of winter and summer) .

The performance parameters of the fan are measured under the standard conditions of atmospheric pressure 760mmHg, temperature 20℃, and relative humidity 50%. Since the temperature of the exhaust gas from the kitchen is much higher than the room temperature in winter and summer, which seriously deviates from the rated working condition of the fan, the air pressure and air volume changes of the fan should be calculated and corrected. The influence of thermal pressure on air pressure and air volume should be considered when selecting the fan type so that the air volume in actual use can reach the designed air volume. The influence on the fan pressure can be calculated by the following formula:

Due to the change of air density, the mass flow of the fan has undergone a big change. That is, the ventilation volume of the actual kitchen has changed. The change in air volume can be calculated by the following formula:

In the kitchen fume exhaust system, in most cases, the fan is downstream of the fume purifier. When the oil fume passes through the fan, its performance and functions have a greater impact. The adaptability of the fan to oil fume pollution has become an important factor in the selection. Generally, it is recommended to use the backward impeller fan, and the installation angle β of the backward impeller blade is less than 90°. Its characteristics are that the impeller blades are large and the number is small, and the dust accumulation has little effect on the impeller. The impeller flow channel is long and slowly expands, which is more in line with the flow direction of pollutants, so the impeller is less dusty. Moreover, the sparse structure of the fan blades also facilitates the removal of fouling.

Selection and arrangement of fume hood

The fume hood should be considered in accordance with the requirements of the kitchen technology. Generally, when the stoves are placed side by side, they are mainly integrated. The layout of the fume hood should be based on the kitchen process requirements, understand the overall dimensions of the heating and cooking equipment, and determine the size of the fume hood. The section of the hood opening should be similar to the horizontal projection of the oil smoke diffusion zone. Generally, it is made of an overall rectangular umbrella-shaped cover, with the oblique waist plate on both sides and the included angle a≤120°. The cover should be added with a certain height skirt, the height of the skirt is about 0.25m. The outer edge of the range fume hood should not exceed the edge of the cooktop. The bottom of the hood should be equipped with a 50mm square-shaped drain and water trough, and a drain pipe should be set at the lowest part of the trough to drain into the sewer. The cover material is mostly made of 3~5mm thick stainless steel plate. An baffle grease filter is installed in the hood and should be easy to replace and clean, so as to prevent oil fume from entering the exhaust fan after the long-term operation and affecting its normal use. Since the emission from the emission source spreads vertically upwards in a cone shape, the emission is generally concentrated within 0.8~1.0m from the emission source. Therefore, the umbrella cover should be as low as possible without affecting the operation.

The design of the kitchen exhaust system should also meet the following requirements:

(1) The air duct should be welded with 1.5mm thick steel plate or stainless steel plate, and its horizontal pipe section should be as short as possible;

(4) The outdoor part of the exhaust duct should take heat preservation measures to prevent condensation;

(5) The setting of the exhaust fan should be considered to facilitate maintenance. And an external motor should be used.

The following points should be paid attention to in the ventilation design of star-rated hotel kitchens: ①Accurate calculation of air volume; ②Selection of fan and coordination of piping system and construction profession; ③Reasonable selection and arrangement of fume hoods and purification of oil fume. Reasonable design of kitchen ventilation system and air conditioning system, correct installation and use of exhaust hoods, strengthening of normal operation management, effective improvement of kitchen air quality, and keeping clean and sanitary are very important to ensure the safety of catering. 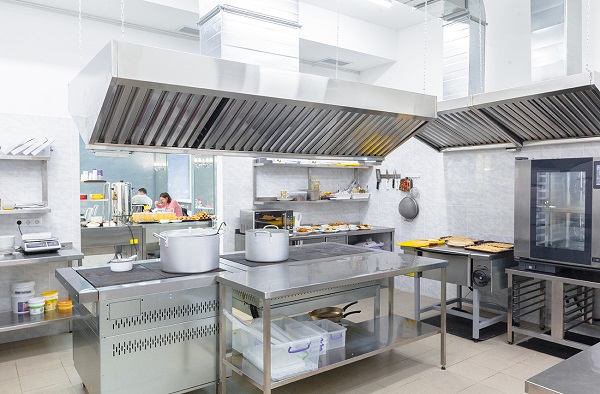